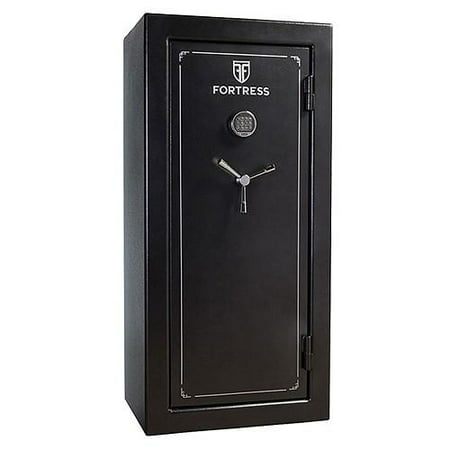 This Fortress 24 Gun Safe is built with you in mind and provides the best value in the market for a long gun fire safe. It has a fire rating of 1200 degrees Fahrenheit for 30 minutes. It features an electronic lock. All Fortress Gun Safes offer extra protection with recessed doors and a patented notched bolt for increased pry resistance. No thief can walk away with your safe because it includes a heavy-duty bolt-down kit. With Fortress, you're truly protected. 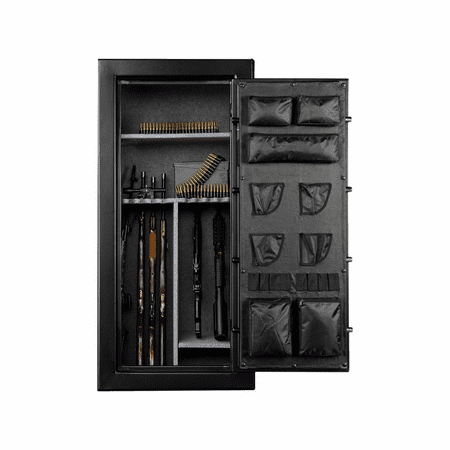 Great starter safe.
I thought I'd post a review since the first review was so harsh, I've had this safe for nearly 4 weeks now and I have no regrets. I decided to purchase this gun safe despite the 1 very negative review. This was my first gun safe purchase, so I did my research on this particular safe before hand and was apprehensive because of the negative review, and to my surprise I found in my research that this safe actually rated out fairly well.

I purchased this safe from Walmart for $558 dollars, after tax and shipping it was approx. $650.00 dollars out the door. But I found that this particular fire resistant fortress 24 gun safe model actually prices out around $800.00-$1000.00 dollars with other competing retailers, so this is a great value. Shipping was fast, got the safe with in a 7-10 day time frame. If your able to pick up the safe from the store I recommend that because it's very likely that your safe will arrive with some bumps and bruises if you have it shipped as mine was, so in my case it had a minor surface ding on the right side which you can't see the way I have it placed so I was able to over look it. The safe is very tall and fairly sturdy and it weighs approx. 350lbs, it took two people to move it in my house. But realize an experienced/prepared burglar with a heavy duty dolly could move the safe alone so if this concerns you just bolt it down with the bolt down kit that's provided with it and it should be an adequate deterrent if coupled with a monitored home alarm system.

Upon opening the safe I was surprised to see the good quality of the interior carpeting and shelving which was very nice and sturdy. You also have the ability to alter the shelving to fit your needs. I was also surprised to see that the safe came with 4 custom pistol holders mounted to the door with 4 additional door accessory compartments which was not advertised so don't buy one. The door pistol holders easily fit my full size sig sauer p226 with a mounted light attached and in comparison that same holder also fits my subcompact beretta px4 with ease. In all the safe probably more accurately holds 14-16 long guns, but I only have three long guns and plan to add more slowly over time so this holds my guns, ammo, and important documents just fine. The first reviewer criticized the door mechanism as being flimsy, it does have some give when secured but I didn't think this was an issue. The door safe has pry resistant notched bolts on all four sides and 40 minute fire rating at 1200 degrees which isn't bad in this price range. The digital lock is very user friendly and has a few neat settings like the tamper alarm that you can set which is great if you have roommates or curious kids in the house that may be tempted to touch. If the battery fails you can also use a key to open the safe. Over all I gave the safe four stars, because it shipped with a minor dent. But if your a first time gun safe buyer looking for a great starter safe at a good value this one is just as good if not better than others in this price range for the money. If your a gun safe snob than you probably can afford a more expensive safe and shouldn't be so critical of safes under $1200.00 dollars. I hope my review of this helps others who are on the fence.Jdubb97

It was not set up inside like the picture portrayed. It was also deeply scratched on the side during transit. Also was extremely late for delivery. Was told Saturday, yet didn't show up till the following Thursday.Eva

Dropped safe
Fortress FS24E 24 Gun Fire Safe with E-Lock $313.33. I received a great price on this safe. It is not a great safe, but I would have rated it 3 stars, but it looks like it was dropped and cracked the door frame. It is still usable but disappointing. For the price, it will do what I want it to do. A really good safe will cost a lot more.Chris

Do NOT follow this link or you will be banned from the site!